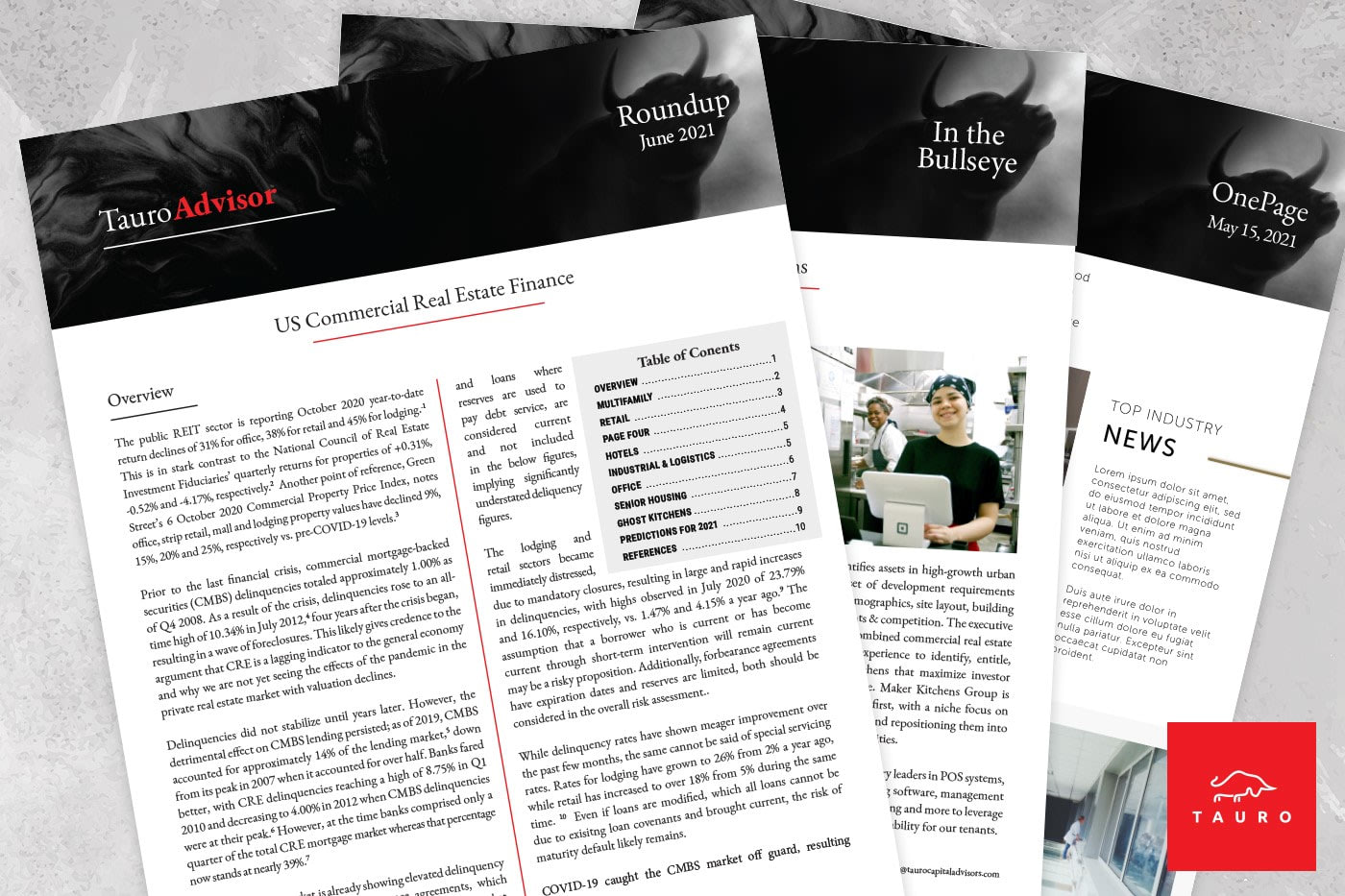 The public REIT sector is reporting October 2020 year-to-date return declines of 31% for office, 38% for retail and 45% for lodging. This is in stark contrast to the National Council of Real Estate Investment Fiduciaries’ quarterly returns for properties of +0.31%, -0.52% and -4.17%, respectively. Another point of reference, Green Street’s 6 October 2020 Commercial Property Price Index, notes office, strip retail, mall and lodging property values have declined 9%, 15%, 20% and 25%, respectively vs. pre-COVID-19 levels.

Prior to the last financial crisis, commercial mortgage-backed securities (CMBS) delinquencies totaled approximately 1.00% as of Q4 2008. As a result of the crisis, delinquencies rose to an all time high of 10.34% in July 2012, four years after the crisis began, resulting in a wave of foreclosures. This likely gives credence to the argument that CRE is a lagging indicator to the general economy and why we are not yet seeing the effects of the pandemic in the private real estate market with valuation declines.

Delinquencies did not stabilize until years later. However, the detrimental effect on CMBS lending persisted; as of 2019, CMBS accounted for approximately 14% of the lending market, down from its peak in 2007 when it accounted for over half. Banks fared better, with CRE delinquencies reaching a high of 8.75% in Q1 2010 and decreasing to 4.00% in 2012 when CMBS delinquencies were at their peak. However, at the time banks comprised only a quarter of the total CRE mortgage market whereas that percentage now stands at nearly 39%.

Today, the CMBS market is already showing elevated delinquency levels. Loans operating under forbearance agreements, which Trepp estimates at $20 billion in the private-label CMBS market, and loans where
reserves are used to pay debt service, are considered current and not included in the below figures, implying significantly understated delinquency figures.

The lodging and retail sectors became immediately distressed, due to mandatory closures, resulting in large and rapid increases in delinquencies, with highs observed in July 2020 of 23.79% and 16.10%, respectively, vs. 1.47% and 4.15% a year ago. The assumption that a borrower who is current or has become current through short-term intervention will remain current may be a risky proposition. Additionally, forbearance agreements have expiration dates and reserves are limited, both should be considered in the overall risk assessment.

While delinquency rates have shown meager improvement over the past few months, the same cannot be said of special servicing rates. Rates for lodging have grown to 26% from 2% a year ago, while retail has increased to over 18% from 5% during the same time. 10 Even if loans are modified, which all loans cannot be due to existing loan covenants and brought current, the risk of maturity default likely remains.

COVID-19 caught the CMBS market off guard, resulting in numerous delinquencies to date. Banks may need to proactively plan and adapt now to avoid a similarly dire situation that could be followed by significant foreclosures. History shows that CRE defaults typically peak 8 to 12 months after the beginning of a financial crisis. Banks now represent a significantly larger percentage of outstanding CRE debt when compared with 2008. Proactive action today to recognize and adapt to the coming devaluation of CRE is important for the long-term health of any bank with real estate credit exposure.

As per the Credit Research Foundation report of March 2021, vacancy rates remain elevated and this trend could persist through 2021 and into 2022, when they peak. Rent growth was flat or weakened due to softening demand, particularly in retail and office. Ongoing threat of bankruptcies and tepid business
and economic environment are risks to rent in 2021; may not bottom out until 2023.

Multifamily: US multifamily investment is expected to increase by 33% in 2021 to $148 billion after a steady recovery in investment activity next year. The sunbelt and gateway cities provide good opportunities, and the market should look similar to pre-covid vacancy levels early next year.

Retail: The exponential growth of e-commerce will slow as brick and mortar sales come back following relaxing lockdowns. New retailers will capitalize on the market that took out many of its predecessors.

Hotels: The hotel industry was greatly affected by fear and the return to normal is not expected until 2023. Rural and interstate hotels should see the fastest return to normal. Crowded cities will take longer as fear dies down.

Industrial & Logistics: More net-absorption than ever before is occurring in this sector. This market is expected to flourish with low vacancy and high rent driven by online sales. The mountain region may offer the greatest opportunity for investors.

Senior Housing: This was one of the most affected sectors, but the outlook going forward is high and should continue improving. Supply should be readily absorbed in most areas.

Ghost Kitchens: As a subsection of the industrial market, these delivery-only restaurant facilities are expected to have an upswing. While not common before, they definitely were not new and going forward it is estimated this sector could be a $1 trillion opportunity by 2030.

National institutions have been tracking commercial real estate closely to monitor its direction. The REIT sector has reported October 2020 year-to-date return declines of 31% for office, 38% for retail and 45% for lodging. However, this contrasts the quarterly returns for the National Council of Real Estate Investment Fiduciary which showed a .31% increase for office and a decline of .52% for retail and 4.17% for lodging. Lastly, Green Street’s October 2020 Commercial Property Price Index seemed to fall between the two noting a 9% decline in office, 15% in strip retail, 20% in mall, and 25% in lodging as opposed to pre-COVID levels. The largest declines were seen in July of 2020, but within the past few months, lodging has increased 2% and retail has increased 5% giving evidence of a return to normal if not better in most sectors.

CBRE reporting predicts multifamily investment to increase to $148 billion by the end of 2021. They also reported a quick return to positive retail sales following the initial peak of COVID-19. In the industrial sector, CBRE says 80% of the US industrial markets will see positive rent growth over the next 12 months. They are less optimistic about office, with a recent analysis suggesting a 15% cut in the overall need for office space.

Recent findings suggest several upcoming quarters of reduced investment activity as the various sectors recover. Although interest rates will remain historically low, that alone will not be enough to sway investors from being overly cautious. With a rebound on its way, the fed rate is scheduled to rise thus increasing interest rates and ultimately affect pricing of investment real estate. E-commerce has greatly reduced the need for physical retail centers while drastically increasing the need for industrial/warehouse space. Although the grocery sector is expected to remain strong and expand, recovery for major retailers and malls is expected to be slow and the instability of this sector is likely to continue.  Albeit slow, office occupancy is expected to improve mid-year with easing restrictions, partly due to the need for in-person training and collaboration of younger workers. Affordable housing has been given a platform, but there is still much to be done in increasing the inventory in urban areas.  Rent payments remain high due to shortage in rental units, legislation around unemployment benefits and economic impact payments. As 2022 kicks-off, the following trends are expected to pick up steam throughout the new year: properties repurposed, sustainable real estate, and technology revamping real estate. 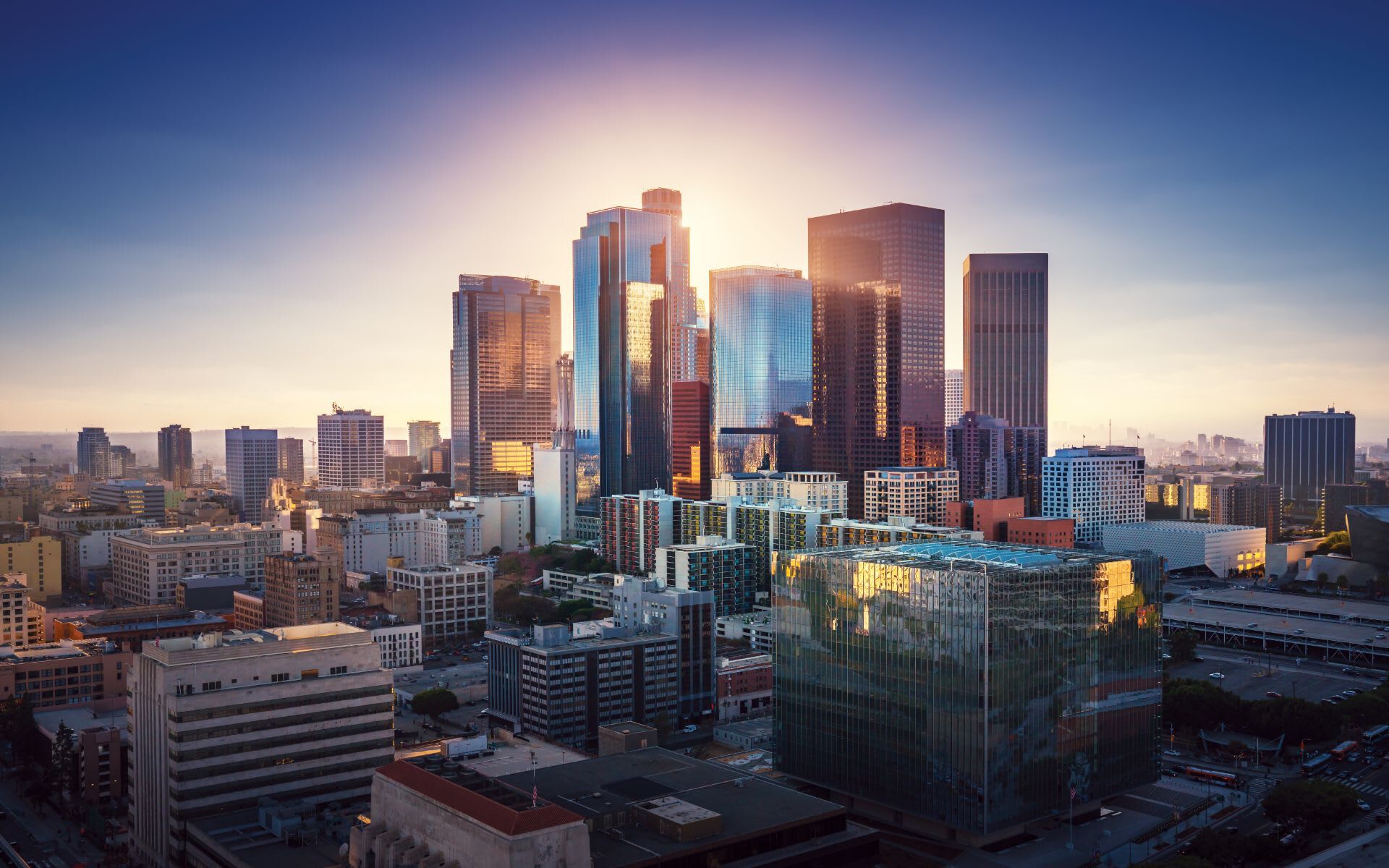